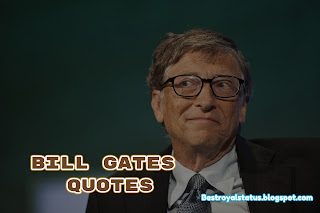 “The general idea of the rich helping the poor, I think, is important.” Bill Gates

“I was a kind of hyper-intense person in my twenties and very impatient.” Bill Gates

“Our success has really been based on partnerships from the beginning.” Bill Gates

“We all need people who will give us feedback. That’s how we improve.” Bill Gates

“Don’t make the same decision twice. Spend time and thought to make a solid decision the first time so that you don’t revisit the issue unnecessarily.” Bill Gates

“We start life with many big dreams–things we want to accomplish, create, build and experience. But if you ask anyone past the age of 40 what happened to all the dreams they had, they will most likely answer; Life.” Bill Gates

“Life has a tendency to just happen. But it happens because we make choices. The life you create and design for yourself is going to accumulate from the choices you make over time. Sure, there are unexpected things that can derail dreams. But we can control where we put our focus, and if we choose to put one dream ahead of another.” Bill Gates

“As we look ahead into the next century, leaders will be those who empower others.” Bill Gates